Most investors have never seen economic data this hot. Wednesday’s ISM Manufacturing coming in at 64.7 is the highest in 37 years. GDP Consensus for 2021 is close to 6% with some economists as high as 8%. Add the fact that Friday’s non-farm payrolls coming in at 916K was well above consensus and the above add some validation to the run this year in cyclical stocks and 10-year yields that have doubled since August.

It’s the elephant in the room. This was the setup for a massive rotation into value as investors moved down the valuation curve into more cyclical sectors like financials, industrials, energy, and materials that could all benefit from an America going back to work.

In a vacuum, a 1.7% 10-year is not that compelling, but the velocity of the move sets the stage for another leg higher later this year. Most of the street seems comfortable with the increase pointing out correctly that rising yields are a sign of increased economic activity. Unless inflation expectations start to pick up, the Fed can stay true to their word that they aren’t even thinking about a change of policy. 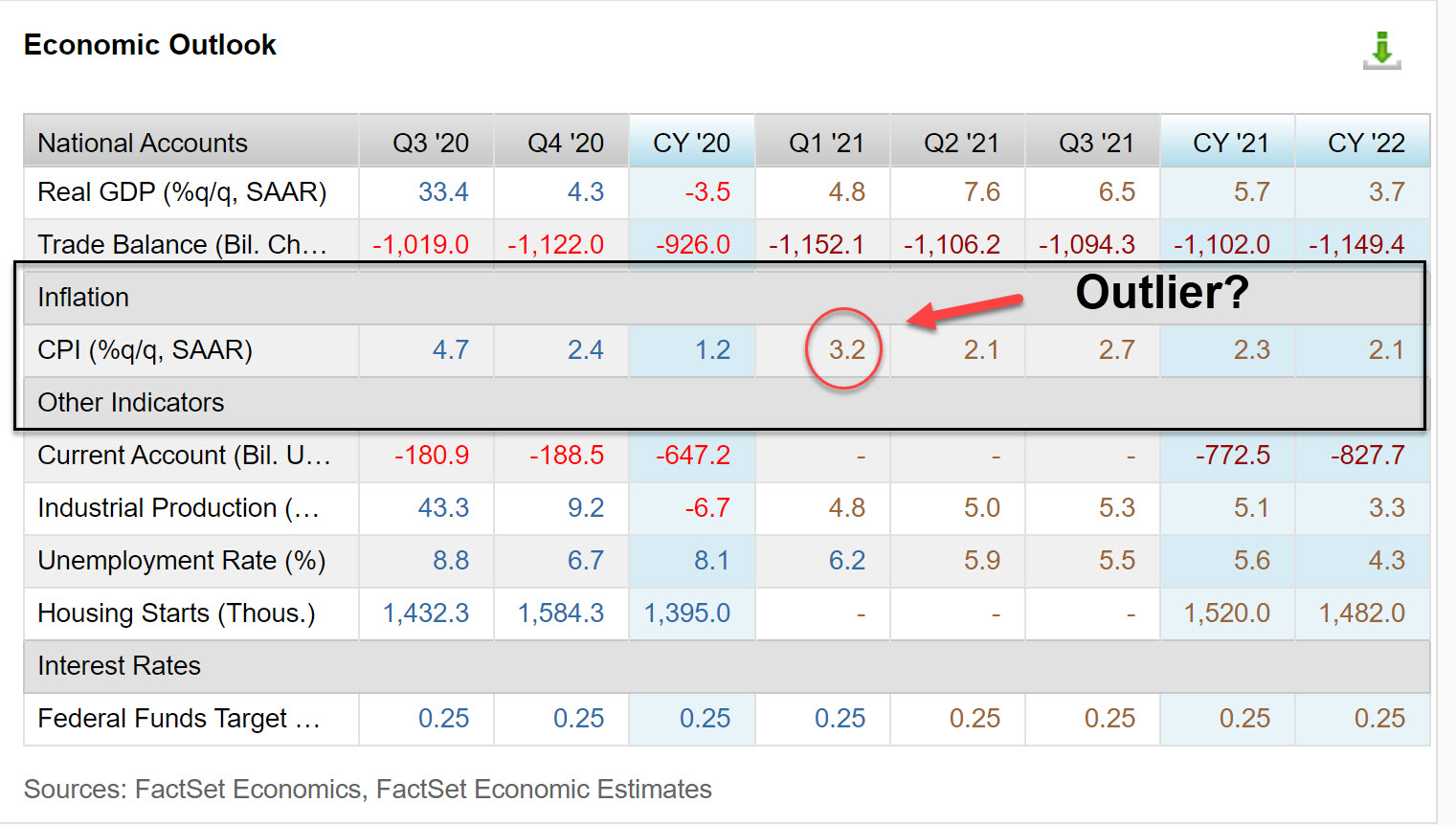 That’s the key of course. Deflationary forces for the last decade have kept rates in check but everywhere we look key prices including energy, housing, rents etc. are all rising. The Fed is going to look at averages but consensus for Q1 CPI is north of 3%.

A lot of rebalancing noise last Wednesday and Thursday as many traders took profits in value stocks to pick up beaten down growth favorites. Let’s see if Friday’s jobs number was enough to force money back into the cyclical trade or if investors return to FAANG favorites.

Investors continue to rush from one side of the lifeboat to the other trying to decide which is the better asset class at this point in the recovery. For the first time in a decade value along with small caps and other forgotten equity classes have mounted a serious challenge to growth which many economists now refer to as long duration equity because of its fixed income like characteristics offering a steady stream of predictable cash flow.

The truth is there is room for both styles but like it or not most investors are overweight growth even if they don’t know it.

The top 5 stocks by market cap are all growth with much of their business model rooted in technology. Number 6 is Tesla (TSLA) a car company that really wants to be a technology company. With much of their money in index funds most investors by definition are overweight long duration equity. If that sounds like you then now is a good time to diversify into some of the sectors likely to benefit as the world goes back to work.

Even if passed in its present form there are few shovel ready projects. This has been a problem for every administration in the last few decades. The regulatory backdrop adds years to the approval of any project regardless of need and/ or popularity.

Biggest risks to the market are the same as they were at the end of last year. Any hiccup in the vaccine rollout or worse failures of the vaccine to deal with a variant we haven’t seen yet are still sit at the top of the equity wall of worry.

Geopolitical events are always the wild card. The President’s tough stance on China is a carryover from the Trump administration. China continues to be a threat in every sense of the word. Xi will test the President several times during his first year. Economic policy is a given but foreign policy and even military challenges shouldn’t be ruled out, especially with the U.S. resuming freedom of navigation patrols in around the South China Seas.

With the first quarter in the rear-view mirror the focus is going to shift from rates and Covid to earnings. The good news is that estimates for the S&P 500 have climbed almost every week since the start of the year and stand at close to $175. In a vacuum 22.9x 2021 earnings is expensive but with rates still relatively benign and the Fed still accommodative, stocks are still the better asset class.

The above of course begs the question at what point will fixed income become competitive. I believe we are at least 100 basis points away before that becomes a meaningful worry for U.S. equity investors.

We’ve talked about this in previous posts but each stair step higher in rates is going to force us to return to the 2018 playbook. Fourth quarter that year gave us some good insight into the challenges for equity investors if the 10-year crosses above 3%. At those levels and higher for high quality corporate fixed income, large asset allocators including insurance companies and pensions can match assets with liabilities using something other than stocks. Portfolio managers will be forced to follow moving back to more traditional equity fixed income weightings especially if equity valuations haven’t returned to historical norms.

The economic calendar is light this week with ISM Non-Manufacturing Monday and PPI on Friday. Investors will be positioning for the first round of Q1 earning’s next week.

*At the time of this article some funds managed by David were long TSLA.

David Nelson is the Chief Strategist of Belpointe Asset Management in Greenwich CT where he manages their US equity and tactical portfolios.

Prior to establishing his own firm DC Nelson Asset Management in 2000, David was a portfolio manager at Lehman Brother’s flagship office in New York City. Lehman approached David at Morgan Stanley where he played an active role in management of their New York City World Trade Center office. He is a Chartered Financial Analyst (CFA), a designation issued solely by the CFA Institute.

David is a frequent commentator and guest on most of the major networks including CNBC, FOX, Fox Business, CBS, Al Jazeera, CCTV and Bloomberg. He also served as Financial News Anchor at Newsmax TV and has hosted events sponsored by the United Nations.

David lectures on the financial markets and publishes frequently including featured articles in the New York Post.

David’s investment career follows his well-publicized success in the entertainment industry where he performed with recording artists The Turtles and David Johansen.